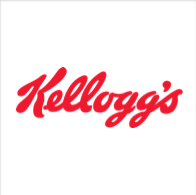 From the company’s home base in Battle Creek, Michigan, Kellogg Company is in a constant battle for the #1 spot in the US cereal market with its main rival, General Mills. Kellogg, founded in 1906, boasts many familiar brand names, including Kellogg’s Corn Flakes, Frosted Flakes, Corn Pops, and Rice Krispies as well as the Kashi brand. While the company works to fill the world’s cereal bowls, it supplements its bottom line with snacks and cookies (Keebler, Cheez-It, and Famous Amos), along with convenience foods such as Eggo waffles and Nutri-Grain and Bear Naked cereal bars. Its products are sold worldwide.

Kellogg operates through several segments based on product category and geographic location. They include US Morning Foods (22% of sales), US Snacks (24% of sales), US Specialty, North American Other, Europe, Latin America, and Asia Pacific. Kellogg’s international business focuses almost exclusively on cereal and wholesome snacks.

The food company manufactures its products in 20 countries, marketing them in more than 180 countries. It generates 63% of its revenues in the US.

The company’s manufacturing facilities in the US include four cereal plants and warehouses in Battle Creek, Michigan; Lancaster, Pennsylvania; Memphis, Tennessee; and Omaha, Nebraska. Its other facilities are mostly in Georgia, Kentucky, Michigan, and Ohio.

Outside the US, Kellogg has additional manufacturing locations (some with warehousing facilities) in about 20 countries in Europe, Asia, Africa, and South America. The company has joint ventures in China, Nigeria, and Turkey.

Kellogg’s largest customer is Wal-Mart , which accounted for about 21% of sales in fiscal 2016 (ended January). The company’s top five customers generated some 34% of Kellogg’s total sales that year. The company’s dependence on just a few companies makes it vulnerable to the loss of or weakness at any one of these retailers. It’s also vulnerable to competition from lower-priced private-label cereal brands, to which consumers typically flock during tough times.

The company markets its cereal products, in general, under the recognizable Kellogg’s name as well as its “healthy” brand Kashi. Products are sold to supermarkets through a direct sales force model for resale to consumers. Kellogg uses broker and distributor arrangements for certain products in retail stores, restaurants, and other food service establishments. These particular arrangements are leveraged to market its products in less-developed areas or in markets outside its focus.

Kellogg continued a three-year slide in revenue and earnings in 2016 (ended January).

Revenues slipped 7% to $13.25 billion in 2016 on lower sales in all segments. Sales fell 13% in Europe due to flat volume and unfavorable pricing. Also US Morning Foods dropped 4% on a decline in sales of Special K.

Kellogg is working at cutting costs and expanding revenue.

Its Project K is a four year efficiency and effectiveness program that began in 2013. This program is designed to help the company focus on core products with increased level of value-added innovation.

On the product side, Kellogg is extending several brands with additional offerings. They include Special K Nourish, Mini-Wheats Harvest Delights, Smorz, and Disney Dory-themed cereal (in line with the Pixar movie “Finding Dory.”

In the cookie aisle Kellogg advertising is bringing back the Keebler Elves to push cookies. The company also is putting attention and muscle behind the Kashi brand. It intends to promote Kashi Go-Lean products, which have been Non-GMO Project Verified, and Kashi Heart-to-Heart products, which have been fashioned to meet the USDA’s organic standard.

In 2015, Kellogg creates joint venture and acquires 50% stake in a sales and distribution company, Tolaram Africa, to expand its presence in Africa.

In 2016 Kellogg was ready to open a cereal restaurant in Times Square in New York City to showcase its traditional offerings as well as more adventurous concoctions developed by chefs.

To further enhance its global snacks business, Kellogg acquired a majority stake in Bisco Misr, the largest biscuit company in Egypt, in 2015.

Number one product of cereals globally